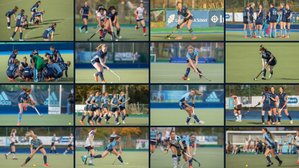 Our ladies 2s will be playing in the National League Conference West next season after a wonderfully successful 21/22.

After facing the threat relegation in recent years, the 2s have shown an exceptional turn of pace and cannot wait to compete at national league level next season and for many seasons to come!

Back in September, the 2s welcomed both new and familiar faces alike to the team. Notable welcomes go to Bryony Woods, Sophie Pettegree and Annabel Dalby, Frank (Becky Loonan) & Maddie Scott. Thank you also for bringing up the average age and welcome also to our U18 contingent who keep us young at heart!

At the beginning of the season, we set ourselves the goal of finishing the season in the top half of the table. At Christmas, having only lost one game (to eventual league winners Oxford Hawks 2s) and with a couple of goal fests under our belt, it became clear we needed to re-assess, and in a very positive way.

We remained in a ‘Top of The Table Battle' till the final whistle of the final game; and in the end we finished 2nd in the table on 52 points with 16 wins, 4 draws and just 2 losses.

Oxford Hawks 1s finished 3rd in the NL Conference West and this meant that our league winners, Oxford Hawks 2s, could not be promoted to join them. After a flurry of emails and studying of the EH league rules, it was confirmed that the 2nd placing team would be promoted - that’s us!!

It’s not all been plain sailing, the cookie doesn’t always crumble sky-navy-sky. Nonetheless, the 2s are nothing if not a tenacious bunch. More than once taking a couple of years off Chris (and Bryony), we do love a game of 2 halves!

I would personally like to say a huge thank you to the commitment the team has shown. The girls are such a kind and friendly bunch, with a good helping of competitiveness in all the right ways. It’s been an absolute pleasure to captain the team! Also a huge thank you to Sammy for her vice-captainship & warm-up expertise.

I know the entire team would like to join me in thanking Chris, we really couldn’t have done it without you! One last thank you to Brian Cox (not the physicist!) and his wise words. Brian kindly stepped in on match days when Covid struck Chris down.

Finally, and sadly, a farewell to those who leave Reading Hockey Club at the end of the season. Longy (Jess Long), Dunners (Georgia Dunlop) & Georgia Hector, we will miss you loads!

Bring on next season!