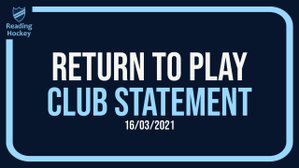 I imagine you are as frustrated as we are that more details and clarity have not yet been forthcoming about the return to play.

We are still awaiting details from England Hockey and all leagues with which to be able to give you some clear guidance. This short note is to update you on what we do know, what we are planning, and what we don’t yet know.

What we do know and what we are planning:
Hockey is returning from the week of 29th March, two weeks from now!

From the 29th March, subject to guidance, we will be back to a ‘normal’ training pattern and will be running like this until Sunday 23rd May, offering an extended season.

Beyond that, we have a full summer of hockey fun planned, with more details coming out shortly.

What we don’t yet know:
What competitive hockey may look like has still not been communicated?

Some leagues that we compete in have declared their intent (Tri-Sports), most are still consulting.

Our current best guess is that competitive hockey will be allowed after the next government roadmap phase is reached, currently communicated as 12th April.

Our fantastic Club Captains, Charlie Crosby, Anna Jukes, Ted Warren, Nick Barton and Judith Barton will be writing to you all separately once we know more.

I hope you are as excited as we are to return to hockey. So, if you haven’t already, I would urge you to get outside and start some ‘pre-season’ exercise this week and we very much look forward to welcoming you back to the Hockey Club in two weeks’ time.